This project deals with research in Evolutionary Computing applied to Control Systems Engineering, by using evolutionary algorithms to generate routes for emergency vehicles. The main challenge is providing responses in a continuously evolving environment within a prescribed time frame, while using limited resources and information that is often incomplete or uncertain.

When it comes to saving lives, short reaction time is crucial. Am emergency vehicle must arrive to its destination in as very little time as possible. Traffic in a busy city can almost double the transit time for a passanger car and cause significant delays for emergency services.

EvoIR aims at reducing the time spent in traffic by the emergency vehicle by providing its driver with a route planning system which is can be implemented in real-time and is optimized using intelligent evolutionary algorithms.

In order to achieve its objective, our project focuses on : 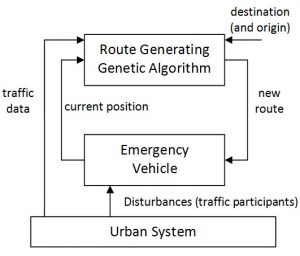 This project has ended.

This work has been funded by University Politehnica of Bucharest, through the “Excellence Research Grants” Program, UPB – GEX. Identifier: UPB–EXCELENȚĂ–2016 Evolutionary Algorithms for Intelligent Route Generation for Emergency Vehicles in Urban Traffic, 05/26.09.2016 (EvoIR).