During an aerobic workout, the body undergoes multiple adaptations that allow optimal output of performance. The metabolic demands that appear as a result of muscle activity are one of the causes that generate an increased delivery of blood to working muscle groups and as a consequence an increased heart rate.

The need to regulate and control the heart rate during aerobic training using a real-time, objective method has appeared. Fuzzy logic controllers are the ideal way of achieving the real time control of a subject’s heart rate due to the fact that they are able to incorporate vague, abstract values. These vague values have their origin in the fuzzy quantification of certain variables found in the methodology of aerobic training. The ability of fuzzy controllers to incorporate the non-crisp values found in sport training, allows us to create a base set of rules that model the so called “classic” training methodology.

Our STS (Smart Training Systems) utilize fuzzy logic controllers to help the athletes obtain the maximum of their workout. Through the intrinsic nature of these fuzzy control systems we are able to regulate many non-linear processes that take place during the human physical activity. Two of these processes that we focused on so far are: the dynamic of the heart rate during running and the regulation of training intensity over long periods of time.

Our solutions for these two processes are Run-CoSy and Motion-AE.

2014: improvements and transition from Matlab to Labview for Run-CoSy and the start of the development for Motion-AE

2013: first real tests of Run-CoSy on humans during controlled sessions

Run-CoSy (Running Control System) offers the athlete a system that integrates a treadmill, an intelligent controller, and a heart rate monitor. This combination is able to control the dynamic of the athlete’s heart rate during running training on a treadmill with an error of under 6 beats per minute. The intelligent controller is able to utilize the data from the heart rate monitor, interpret it, and then modify the velocity of the treadmill to regulate the value of the heart rate according to the predetermined setpoint values for that moment during training. 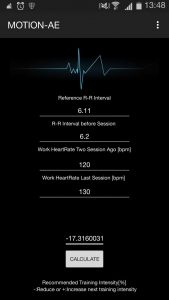 There is a strong correlation between the intensity value that needs to be determined for the next training session and its previous value. As the set intensity value goes higher it becomes harder for the subject to maintain the required heart rate. There is a need to regulate the values of optimal intensity for the next training session to be able to achieve a constant increase in overall fitness. The ability of a software to help an athlete control their training intensity over long periods of time without an over complicated interface or protocol, would make it an invaluable tool for performance.

Motion-AE improves the training intensity in an offline manner. It combines some advantages of stand-alone devices with the advantages of smartphones, but it is not a hybrid solution. The data needed for the application to decide the level of the next workout’s intensity can be recorded with any wearable system. The application is independent of the wearable system, in the sense that users can record training data and then input it into the application. The wearable device does not have to be connected with the smartphone and users can leave their smartphone at home during training.

Find out how to contribute to funding this work.