HELGA (Heterogeneous Encoding Lifelike Genetic Algorithm) was designed for the modelling and simulation of Earth population evolution, on a global scale, throughout multiple historical eras. The model shows the tendency of human evolution towards one mixed race. The algorithm takes into account the influence of social factors, such as the Industrial Revolution or the discovery of the New World.

The idea that GAs could be used for simulating social evolution flows was based on their having been inspired from Darwin’s natural selection theory. As discussed in the previous section, there are significant differences between reality and the GA; therefore some modifications are required in order to diminish the gap.

The modifications made to the standard genetic algorithm in the attempt to convert it into a tool for modeling the evolution of populations mainly affect the significance and shape of the genes in the chromosomes’ codification and the standard crossover techniques. For each gene, it is necessary to show its significance within the chromosome, explain the fundamental assumptions made in order to imitate reality and simplify it at the same time, and the particular crossover technique employed in each case. The result is a lifelike GA with heterogeneous encoding. 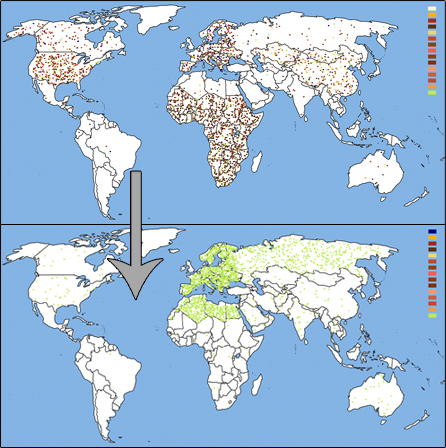 The fundamental principle of this algorithm has been based on the heterogeneous encoding of genes and special crossover mechanisms that allowed the simulation of human evolution. A series of rule bases and constraints have been designed and implemented in order to model various genetic results during crossover, which further the model closer to real life evolution. The experiments performed in this paper verified the nowadays absence of “pure” races. With the premises that, originally, the population was divided in five races, it was shown that, throughout evolution, human interactions due to some factors like migration have concluded in the mix of these races. The lack of diversity, however, might result in an uneven global geographical distribution of population.

The implementation of a particularized fitness function has been used to simulate the changes in social factors, such as the Industrial Revolution, the discovery of the New World or the poor health conditions of the Middle Ages. A level of uniformity has been observed during the experiments performed with HELGA, which is similar to the globalization effect of today. Considering this issue, we propose another research direction: the study of human evolution in the next era (the future), taking into account adequate factors, such as technological developments and social networking.

This project has ended. Contact us for future collaboration in this field.